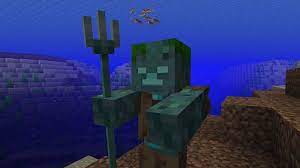 Minecraft is a tough game. If you have been playing this game for long then you will know by now that this game can get very hard very quickly, Impaling in Minecraft. In order to battle everything that the game throws at you and to win in the process Minecraft offers you enchantments. You can use different enchantments to get different results. Impaling is amongst one of several enchantments that you can use on your trident. However, before we get knee deep into the implaing enchantment let’s first understand what enchantments are properly.

What is Enchantment in Minecraft?

When an armour or tool is successfully enchanted it will shine brightly like a potion for other players to know that you are holding an enchanted item in your hand. An enchanted item will display their level of strength and current enchantments on your screen in the inventory menu. Shovels, pickaxes, axes, swords, armour, and much more can easily be enchanted and used on mobs for maximum damage.

Now that we understand the basic functions of enchantments, let us understand what this impaling enchantment is and what it does.

The Impaling Enchantment in Minecraft

To begin with, impaling is an enchantment that you can use on tridents. Doing so causes the trident to deal extra damage on each hit when facing aquatic mobs or any mobs in general that are in water. Each level of impaling deals an extra damage hit on your trident when used against enemy mobs. The only drawback of using this enchantment is that it can only work with a trident, and tridents are very rare to come-by.

Tridents are an item in the Minecraft gameplay. They are very rare and a powerful tool to use underwater or in aquatic battles – since you cannot use a bow and arrow under water. Tridents have the capacity to deal drastic damage to aquatic animals. Players can also fly using the riptide enchantment on the trident on a rainy day.

As discussed above, trident is a rare item which cannot be crafted. In order to acquire a trident to use the impaling enchantment you are going to have to defeat underwater zombie mobs called Drowned which are spotted more in deep oceans than rivers.. These mobs appear holding a trident, therefore, in order to obtain their trident you are going to have to fight them, be able to defeat them and hope for a chance of trident dropping; even though that chance is very low.

If you are playing the Bedrock edition then you have a slightly higher chance of trident dropping when you defeat a Drowned. You can also use Minecraft seeds to create an underwater world for a better chance of encountering Drowned zombies and defeating them. While battling a Drowned, you can boost your chances of obtaining a trident if you have already applied the looting enchantment. However, if you are playing the Java edition then you have a significantly lower chance of acquiring a trident from these mobs.

There are a total of 7 enchantments available for tridents in Minecraft. Once you have a trident you can use one of these 7 enchantments to enchant your trident: Riptide, Impaling, Channelling, Mending, Loyalty, Curse of Vanishing, and Unbreaking.

How to Use Impaling Enchantment?

Since we now know a great deal about impaling and trident in Minecraft, let us divert our attention towards how to use the Impaling enchantment in general.

You can use the impaling enchantment on your trident to exact more damage from underwater mobs such as drowned, glow squids, fish, etc. You can also use it to go exploring a few ocean monuments. Since these monuments are swarming with guardian and elder guardian you can use your enchanted trident to kill them, since these guardians are still aquatic mobs.

There you have it! Using enchantments in Minecraft can be a little confusing at first but we hope that we have helped you understand the process through this article. Impaling is a great enchantment to use if you like deep sea diving in Minecraft. Don’t forget to take a spin at it the next time you’re in front of your console playing the game.

How to Turn on Cheats to Run Commands on Minecraft