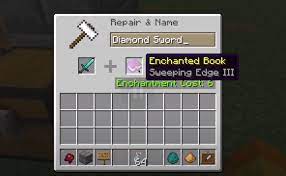 Whether you’re trying to create an indestructible armor set to take on the Ender Dragon or you’re planning a huge raid and would like to beef up your weaponry, Minecraft Enchantments are one of the best ways to give yourself an advantage in Minecraft. It’s a fairly straightforward process, but it does take a little getting used to. There are also a lot of items involved and a lot of guidelines to remember. Sharpness in Minecraft

Sharpness is one of the most widely-used enchantments and it’s also one of the most useful. An enchantment that can be applied to any sword or axe in the game, Sharpness makes your weapon all the better and because of that, you should always use it.Sharpness is an enchantment in Minecraft that can be applied to any sword or axe you find or craft. The Sharpness enchantment increases the amount of attack damage dealt to a player or mob. It’s easy to obtain and has a maximum level of five, which is more than most enchantments have a maximum level of three.It’s an enchantment you should always use. How do you do that though? Fear not, we’ve got you covered. Here’s how to get Sharpness & what it does in Minecraft.

The Sharpness enchantment Command is available in the following editions:

Sharpness has the following enchantment ID and Name values

Sharpness is an enchantment that increases melee damage of the sword or axe it’s been applied to. Each level adds a multiplier of 1.25 times the damage. So, at level one, your sword is 1.25 times more powerful than it was without the enchantment. This multiplier continues to level five.

What we need to add Enchantment

How to Get It

Items to Enchant with Sharpness

In Minecraft, the Sharpness enchantment can not be combined with the following enchantments:

We hope that we have helped you better understand the mechanics of sharpness in Minecraft and how to use it in the gameplay. If you ever have doubts then we hope that you refer to this article to clear them. The next time that you play Minecraft don’t forget to try this feature.

How to Make Charcoal in Minecraft

How to Make a Lectern in Minecraft